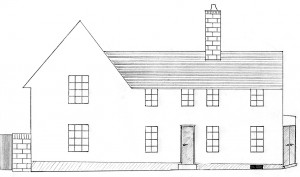 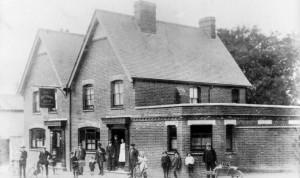 The earliest reference to the Greyhound Inn that I can find is in an advert in the Suffolk Mercury in March 1728.  At that time it would have looked like many of the timber-framed, plastered buildings in the High Street.

Then, early in February 1916, Mr H W Lake came along to the Ixworth Petty Sessions, he was there as a representative of Messrs Greene, King and Sons.  Mr Lake explained to the magistrates that the population of Ixworth had decreased in recent years and that Greene King held the licences of all the pubs in the village; his proposal was to give up the licence of the White Horse (which stood in the High Street on the land now occupied by the Village Shop and 13a/b High Street).  The plan was for the licence of the Greyhound to be transferred to George Bullock of the White Horse while the Greyhound was closed and rebuilt in the form which we see today.  The alterations were expected to take ‘a month or so’ (in the middle of the Great War if you please) and, once complete, the White Horse would be closed and George Bullock would relocate to the Greyhound.

John Bibby was landlord of the Greyhound at the time and Greene King’s hand may have been forced a little as Bibby had been found guilty of defrauding the Old Foresters’ friendly society only two weeks earlier – an organisation which used the Greyhound assembly room to hold their meetings and of which Bibby had been the treasurer for years.

Superintendent Reeve of the Ixworth Police thought the proposal was ‘splendid’ on two counts: he said that the White Horse was a not altogether suitable place for a licence (Henry Cooper had written to the Bury Post about some of the ‘ladies’ who plied their trade there) and he had heard that the alterations included taking the corners off the building which would be an improvement.  The magistrates approved Greene King’s proposal.  As to the corners of the building, the only photograph of the ‘old’ Greyhound that I can find suggests that the new building has the exact same footprint as the old but just with less of an upper storey.

The work may have dragged on a little as the White Horse did not go to auction until late in July 1916 and Bullock didn’t move out until the end of September.  So, if you find yourself in the High Street this month, why not pop in to the Greyhound and wish Colin and Sue a very happy centenary?