Cattle in the High Street?

(or even geese or turkey for that matter)

It’s funny how something seemingly random sets off an interesting train of thought, is it not? In my case it was the discovery in a shed, of a seemingly unloved, though undeniably, battered old paperback dating back to the 1970s. It concerned the ancient track-ways of England, Scotland and Wales. Some of these timeless pathways have evolved into modern metalled roads, many have vanished beneath modern development, but some still remain in the form of accessible footpaths and ‘green lanes’. That includes a number in Suffolk as a whole, as well as a few local examples. To site one feature that most folk in Ixworth will know is the bridleway from Commister Lane that leads eventually to Great Livermere with a spur to Troston; this was undoubtedly the original route from Ixworth to those two villages (note the packhorse bridge crossing at Hempyard, below) before Ixworth Heath was enclosed and a new enclosure road was constructed in the early part of the 19th century, which is now the current road to Troston from the A1088. 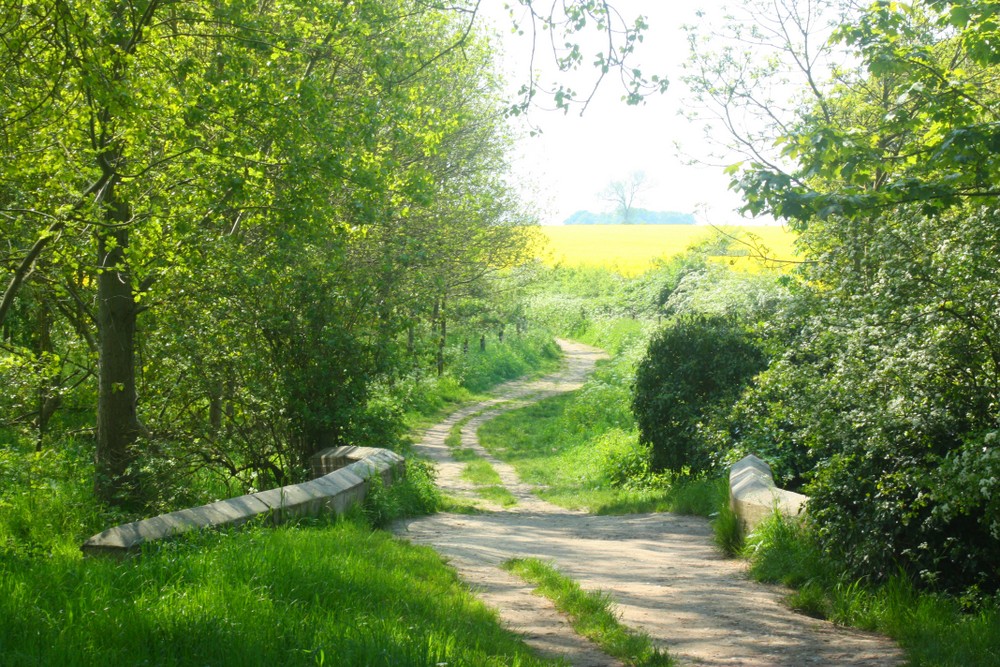 The old route became redundant and morphed into what we have today – the bridleway (effectively a green lane) and footpath system. All this might explain the sharp right angled turn on the current road to Troston (circled below), right by the parish boundary, which picks up the line of the footpath from Ixworth and which, thereafter, is metalled.

All this got me thinking of how stock (cattle, sheep, pigs, geese and even, later, turkeys) was transported to major markets, such as London, in the days before the railway was constructed. 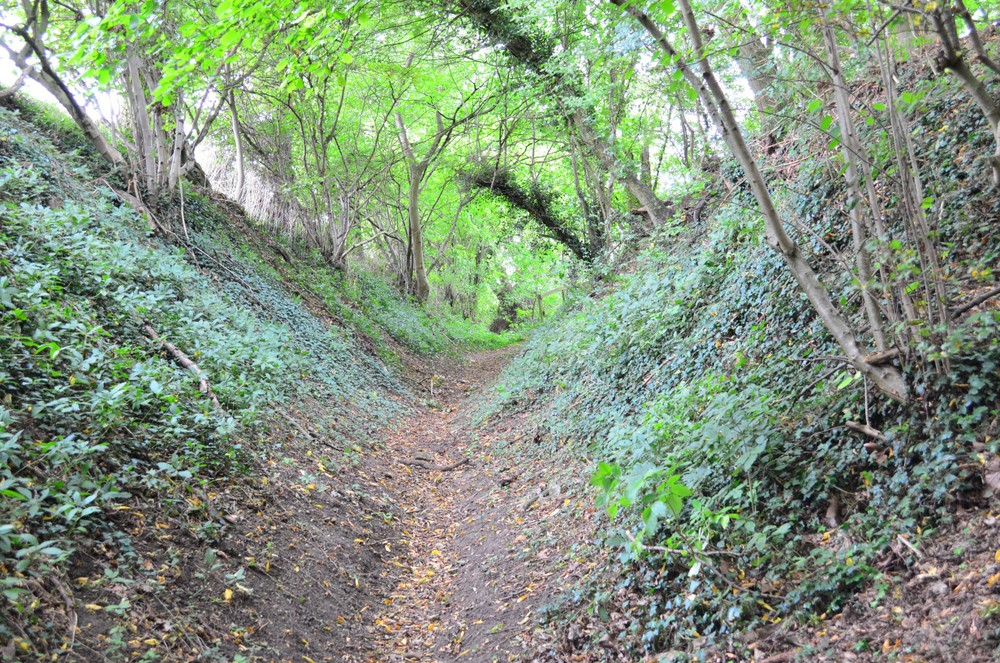 Well the simple and stark truth was that they were walked to market! Walked is probably too passive, as they were actually ‘driven’ to strict timetables and the hardy souls who took responsibility were know, right across the land, as drovers. Some of the green lanes we know today, probably,  were once Drovers’ Ways. Some hints can be gleaned from modern Ordnance Survey maps, with the use of drove, drift, oxway, lode, neat, holloway or especially in Suffolk, grundle, as the one at Stanton (above). Even the names of pubs on the droving routes give us clues, such as Shepherd and Dog, Black Bull, Boar’s Head, Travellers Rest and the obvious Drover’s Arms. There are less obvious give-aways. As an example, the green lane or modern version will have very wide, grassy verges, free of trees, which allowed animals to graze en route. Again, there will be obvious water sources adjacent to the route, such as natural ponds, dew-ponds, well or spring, not to mention rivers.

“Suffolk is particularly famous for furnishing the city of London and all the counties round, with turkeys;

and that ’tis thought, there are more turkeys bred in this county, and the part of Norfolk that adjoins to it, than in all the rest of England”

What has all this got to do with Ixworth you might be wondering, quite justifiably? To put this into context, cattle especially, were driven all the way from Scotland to, for example, Suffolk and Norfolk, to be fattened up on lush pasture lands, before being driven once again to Smithfield Market in London! The Peddar’s Way was definitely used by drovers. One of the most famous fairs for cattle was St Faith’s, not far outside Norwich and quite local to us here. Remember, also, that Daniel Defoe  noted that:

He recorded, in his travel diary through the eastern counties in the 1720s,  of witnessing ‘thousands‘ of geese and turkeys being driven from Suffolk into Essex, crossing the River Stour at Stratford St Mary on the long trek to Stratford atte Bowe in London.

What follows is from a cattle drover’s advertisement of 1826 and gives us  a local perspective:

John Mald, drover from Norwich to London, returns his sincere thanks to his friends and the public for that liberal share of patronage which he received last year, and begs respectfully to assure them that the same unremitting attention will be paid to the punctual delivery of all cattle etc. with which he may be entrusted, to any salesman whom they may appoint.

It continues (and note the Inns – he must have picked up stock en route with two routes):

J.M. Will start on Saturday 2nd December 1826 and stop at Homesfield Swan on Sunday night; Wortwell Bull Monday morning; Cap Inn, Harleston, at 12 o’clock; Needham Fishmonger’s Arms; Brockdish Greyhound and Scole Inn that night. Also at the Queen’s Head, Long Stratton at nine o’clock; Tivetshall Ram at twelve; Dickleburgh Kings Head at three in the afternoon, and meet at Scole Inn the same night. On Tuesday morning at 10 o’clock at Wortham Dolphin; Botesdale Greyhound till two; Pakenham Woolpack that night; Bury Market every Wednesday; and at Alpheton Lion that night.

Interesting – Pakenham Woolpack for the night – that is, obviously the former Woolpack pub (pictured below, today) which we would consider to now be part of Ixworth but which is just over the bridge and so officially in the parish of Pakenham. What a great location to stop for the night right down by the river with easy access to lush pasture.

Using the data in the advertisement, it’s possible to work out how fast the drover would travel on this fairly flat route. With the fair assurance that the Botesdale – Ixworth leg probably took in Walsham le Willows, that makes a total journey of around 45 miles; allowing for a bit of wandering to avoid natural barriers (or toll-bars!) that gives an average 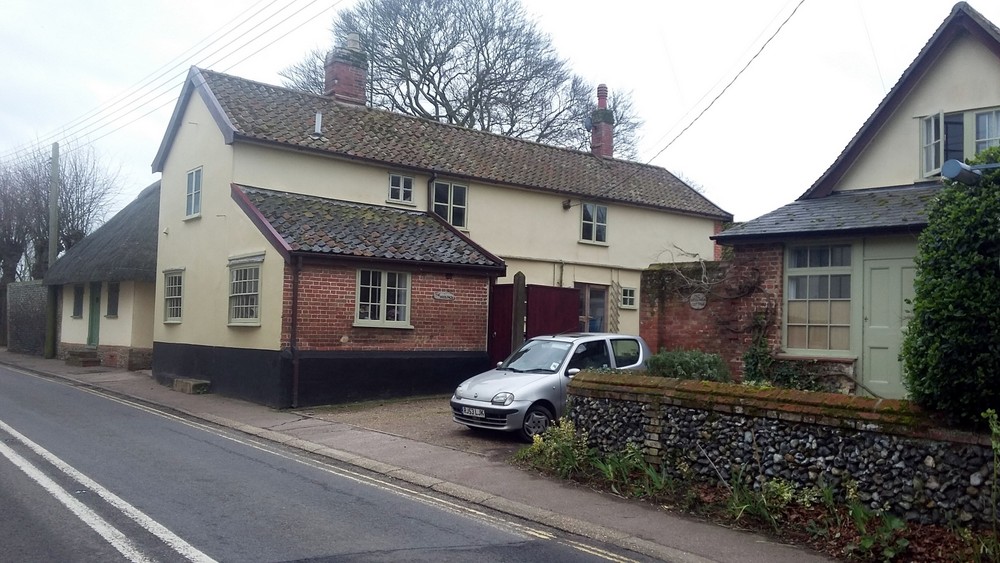 distance per day of about 15 miles – probably a typical value for flat landscapes. Mald does not intimate where he actually started from, but one can surmise that it was near Norwich to reach Hommesfield by Sunday night. Conversely, there is no mention of the route to London after Alpheton, but old maps suggest Sudbury, Halstead, Braintree, Chelmsford, Ingatestone, Brentwood, Romford with a possible split after (depending on the weather etc.) via either Wanstead or Stratford, on the way to the final stop at Smithfield Market. That would have made a total distance of some 115 miles which the drover probably did within a week; it was then a night’s rest and back to Norwich by cart or stage to start all over again! They must have been tough.

A couple of points to conclude might be in order. Firstly, if you travel today on the Ixworth – Walsham road,  you will notice that it fits the bill as a drover’s route, as in many places it was (until recently) treeless with really wide grass verges, so have a look when you next drive that way (see photo). 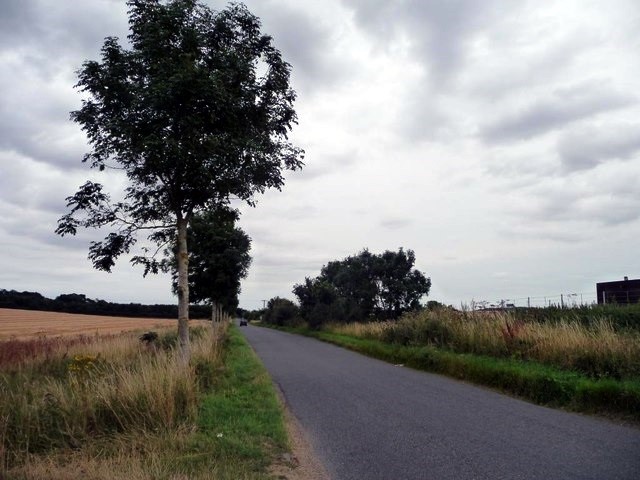 Secondly, if you feel the traffic is irksome in our High Street today and you fret over the odd pot hole or two, just remember the Ixworth prior to the railways coming to Suffolk, where, along our principle, muddy, thoroughfare, you would have had to make way for herds or flocks or gaggles of tired animals looking for a good feed down by the Blackbourne and a few bedraggled drovers intent on propping up the bar of the Woolpack until they fell asleep!

One Response to Drovers through Ixworth