All of you will know of the former village school located in Thetford Road, as even today the exterior is a dead give away of its original use. It was, however, way back in the year of 1840, to be exact September of that year, that plans were drawn up for the building with the aid of the Ixworth builder John Read. The school seems have thrown open its doors in 1841 or very soon thereafter  although no school logs, referred to in this article, seem to exist before 1863. A recent assiduous search with Robbie Cousins failed to discover an original foundation stone anywhere within the current day building. 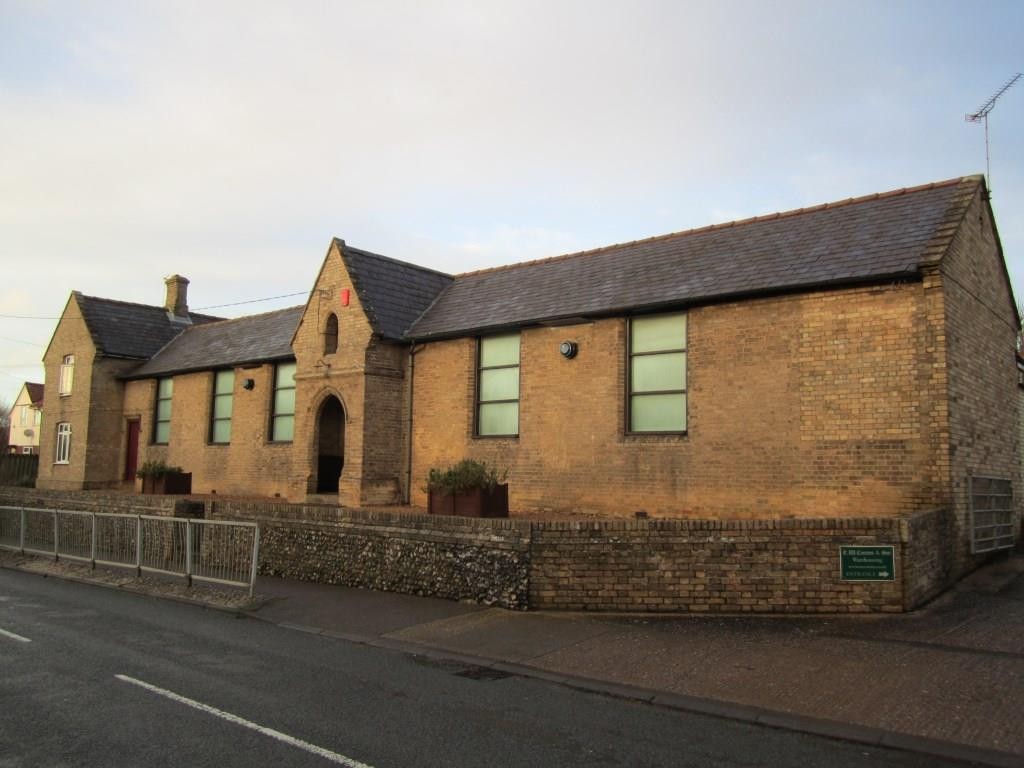 The opening of this little school under the wing of the Church of England, in this community as in many others, was a major educational` step in mass education in this country, as before that schooling was, scholarships aside, generally the province of wealthy parents and guardians who could afford to send their charges to private schools or employ the services of home tutors. However, it is probably safe to say that there was no widespread desire for the education from the population as a whole. Indeed, considering the social legislation of the Victorian era, education did not become a real priority until the year of the first Education Act of 1870! 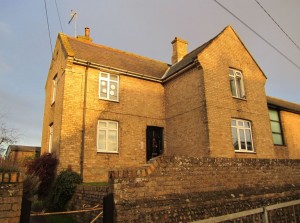 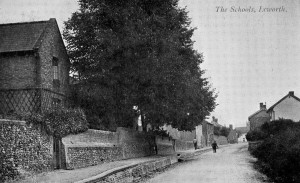 … not much different then

Notwithstanding all of this, the original plan of our school had two classrooms, one for boys and one for girls; the teacher’s house was added to the building in 1850, whilst there is the suspicion that additional land was given in 1864/5 to be used as a playground. The school site today The school log books are, by their very nature, quite detailed chronologically so the aim is not to reproduce them in full here but rather to give a flavour of what education was like in our Victorian village school, using recurring themes or significant events and topics. In essence that’s a bit subjective but here goes anyway!

The period begins with Richard Green, who was the Master of the boy’s school from 1850 to 1884. It is thought that between 1851and 1863 Richard Green was the only teacher (which suggests a mixed class), as, if for any reason he could not be in the classroom the school was given a holiday. (modern scholars please note!) This was certainly the case in October 1864 due to the sad death of Mrs Green, when the school was closed for two weeks. Another teacher, Eliza Fletcher, was employed as Mistress for the girls’ school sometime before 1866. It was probably common practice at this time for older girls (and boys) to assist (early form of Teaching Assistants perhaps??) in the learning of the younger pupils. To illustrate this an ‘Agreement’ was drawn up between the Rev Samuel Blackall and Eliza Fletcher that a Jane Stevens would be engaged as a pupil teacher from May 1866 until last day of April 1870. She would be paid 2s a week in the first year and the sum would be increased by 1s in subsequent years. She would not be obliged to work more than six hours a day or 30 hours a week. Jane ended her duties as pupil teacher in her fourth year, 1869; these pupil teachers were expected to take an examination which was usually held in St James School, Bury St Edmunds.

The assumption today is that any child living within the bounds of the Parish of Ixworth would be eligible to attend the school. However, an intriguing entry in the log of 2nd May 1870 slants this rather differently. This states that Rev J Yellowby (Ixworth assumed) and Rev C W Jones (Vicar of St Mary’s Pakenham from 1861 – 1904) came to an understanding on the ‘Pakenham’ children – those who already attend would remain. In future, no Pakenham child would allowed until an order was obtained from Rev Jones. They would have to pay 1½d per week. (it is believed that Ixworth children paid 1d a week). The mention of just Pakenham children being involved and allusion to no other parish is probably not as mysterious as it might seem. Even today, if you cross the road bridge over the river Blackbourne (past the Cider House) then you are actually in the parish of Pakenham. Children who lived just over the bridge would have a very long walk to Pakenham village school, twice a day at that, so an arrangement was obviously in place for these families to use Ixworth school, but at extra cost! Pressure on accommodation later may have led to restrictions. 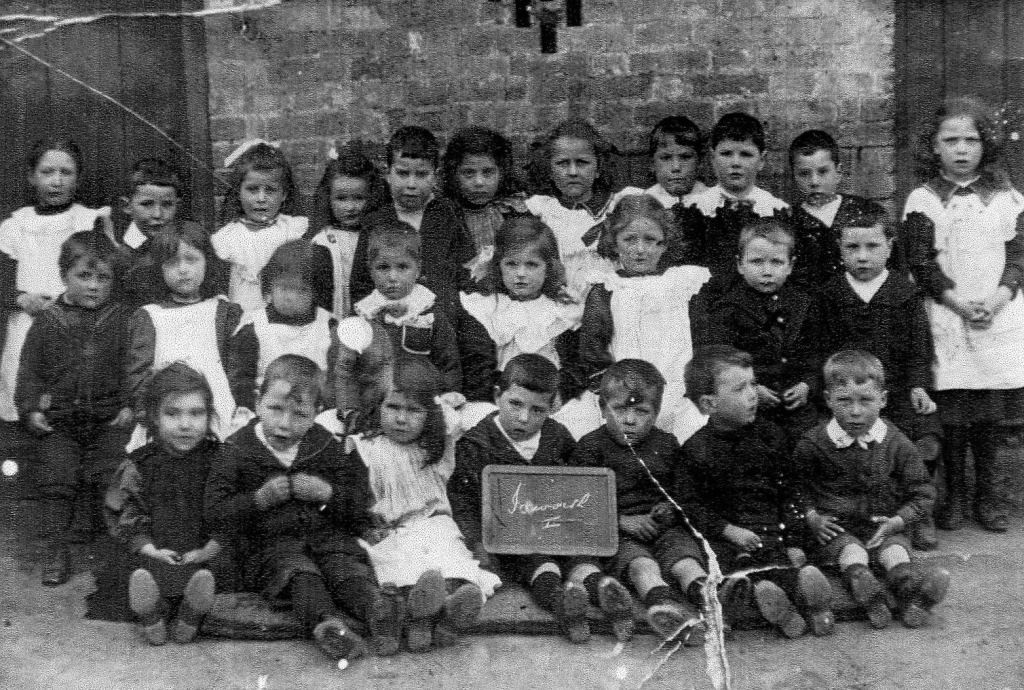 Faces from a bygone era

The subjects taught were all pretty basic and included Religious Knowledge, Arithmetic, Writing, Spelling, Geography, Poetry and Singing. One suspects that teaching methods were also very formal. The girls were taught needlework as an extra. Teaching materials would have seemed to be at a premium as a note was made that the school was fortunate, in September 1869, to be presented with a dozen books on the geography of England & Wales. It was Miss Helene Greene who taught Geography to the older pupils where exams were held annually. A glimpse into the quality of the education might be gleaned from a summary report of the boys and girls school for 1863:

‘Religious Knowledge, Writing, Spelling & Arithmetic are very good. Reading is monotonous and not efficiently distinct. The school is excellently conducted.’ The school is going on very well and improving. It’s work has had great attention paid to it as well as other things’.

Another example casts further light as, on May 13th 1867. Rev J Lacey Hulbert (noted as ‘Manager’) received the following Report from the Committee of Council entitled “Summary of the  Inspector’s Report on the School” We would probably know this as an OfSTED report today!!:

‘Boys and Girls. The school continues in a satisfactory state. I have found writing of the fourth standard a weak point in today’s examination, the Arithmetic of the same standard, although there were no failures, was not as good as last year. Night School:- 23 evening scholars were presented of these 3 failed in Reading, 8 in Writing and 9 in Arithmetic. The failures were mainly in the upper standard’.

The reference, above, to a night school (in October 1863 it was noted: ‘Evening School commenced – 30 present’) is suggestive that at certain agriculturally important times of the years pupils were required to work during the day by their parents. Some of these tasks carried out by the boys are listed as:

Many parents may not have been that supportive of the school and its aims. Indeed, some made their feelings known, illustrated by a log book entry of a boy who was given a sum to try at home; his father sent a message “His boy is not to be bothered with sums and he will rub out all that are sent”; again a mother came to the school with her boy and expressed that she hoped “Mr Green would not force so much Larning (actual spelling).” It was an obvious uphill slog for the Master as he notes in October 1872 that: “I am not able to get the boys to school in consequence of the annual Agricultural Show and ploughing matches being held in fields nearby”.

The weather had a profound influence on the running of the school as many boys only attended school when there was severe weather and therefore no field work. However on very cold and snowy days they were unable to walk to school twice a day so in winter months attendance could vary considerably. It was noted in the log book for February 14th 1865: “Two boys broke through the ice, had to be drawn out with ropes; narrow escape”. In February 1869, although severe snow and rain prevented many attending school, several boys as young as six years old were obliged to scare birds in the fields!

Sadly, many children were very vulnerable to diseases that we think nothing of today and some of these impacted greatly on the school. They were hard times, illustrated here:

Believe it or not, between September 1871 and February 1872 there was was an outbreak of Smallpox in the Parish!

As this was a Church of England school good behaviour would have been expected at all times. However, the type of punishment in the school for both boys and girls was not noted in the log books. Sometimes the punishment was being kept in and not allowed in the playground. The telling of lies was punished as was truancy, bad language, playing with ink, idleness and stealing. Although in 1873 it was noted that a girl was caned for saying “I shan’t”, this is the only time the cane was mentioned in this decade. However the conclusion in many cases was that the punishment was that the child or children were refused entry to the school, unless they paid an increased admission charge. However, things weren’t easy for either pupils or teachers, as you will read from this series of entries, but it is pretty evident that times and attitudes have moved somewhat:

Feb 27th Copy of letter sent to the boys mother. “Feeling sorry that your boys should be deprived of schooling, I will make you this offer: If you send 2d each for your two boys every week, I will agree to return to you (every Friday afternoon) 1d, if they have attended regularly the whole week. I will try this plan through the next months and if they attend regularly, I will see whether I can make it easier for you after that”. (I am yours truly R Greene)

Sometimes things were very much more serious as illustrated in this extract of 12th October 1867:

“James, an incorrigible, set fire to Mr Booty’s Stack. This boy has never attended school regularly. But when he did attend, he was always watched for fear of (his) thieving propensities – committed for trial, Dec 10th”.

James was sentenced to five years in Reformatory. These were very different times indeed.

One should not assume that the girls were immune from mal-behaviour as this extract from the girl’s log underlines: ‘Child continued to be a problem after being punished for disobedience. Mother does not wish her child to be punished and was very abusive. Later the mother of child in question asked if she could return to school, admitting she had ‘beaten her severely, as she could do nothing with her’

Cleanliness was also important to the school, with mention of a girl wearing a dirty hair net which then caused problems for her mother. It was also noted that sometimes a boy would
be absent from school because he had no clothes decent enough to wear! This no doubt prompted the mention from 1869 that a ‘yearly clothing club was started for the girls’. Another boy (having already been absent for 2 weeks) was promptly sent home for having a very dirty head.

In April 1884 it was finally revealed: ‘Richard Green completes his 33 years and 7 months teaching in this school; now receives a valuable present from his past and present pupils consisting of ….’ Unfortunately we are not told what the gift was, but one might suspect something of import following that marathon service with generations of Ixworth pupils!