In raiding the precious memories of local residents the Ixworth History Group found that several people had copies of two photographs of the Gloucester Hussars.

One showed troops and horses encamped behind The Beeches in the High Street and the other was of three officers on horseback outside the Cyder House. No-one had any explanation as to why the Gloucesters were here. 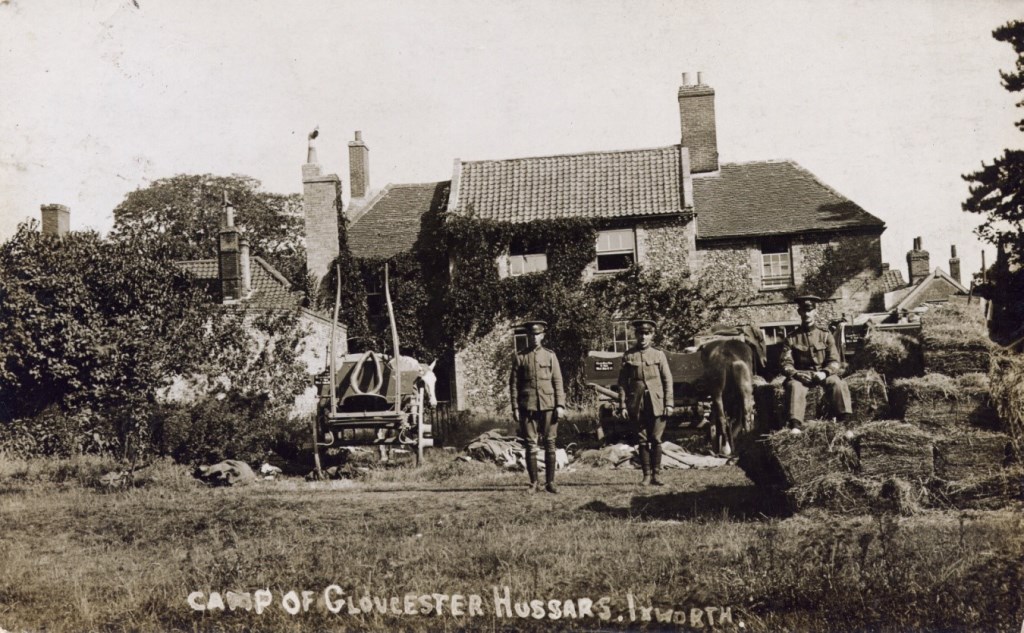 The Gloucester Hussars’ Camp at the Beeches

The Gloucester Yeomanry were a volunteer cavalry unit and along with others from counties nationwide they were the fore-runners of the Territorial Army. When war with Germany was declared on 4 August 1914 action was taken immediately to provide home defence. To guard against the possibility of an invasion troops were moved towards the east coast.

On 11 August the Gloucesters mustered at Warwick Racecourse along with their equivalents from Warwickshire and Worcestershire – 1500 horses and 1500 men in all. There they were all formed into the 1st South Midland Mounted Brigade. The Regimental History simply states that the Gloucesters were deployed ‘to the Bury St Edmunds area’. Fortunately for us the archivist of the Royal Gloucester Hussars has recently been working on a newly-discovered diary of a Trooper who was part of that deployment.

Trooper X’s diary covers the whole of the First World War and he writes extensively about training in the UK in the early days. He also writes beautiful prose like this:

“Right across England the troop trains steamed, all through the summer day and into the darkness of a moonless night. Train after train of troops had arrived at Bury St Edmunds during the day, and untiring bands of ladies had served them with hot drinks and sandwiches. They recked not at all the lateness of the hour, but stayed to refresh the men who emerged from the late trains and thronged the station square in shadowy troop formations.
With strength renewed after their long and tiring journey, the Gloucesters moved off by squadrons to their respective stations—A to Great Barton Manor, B to Pakenham, and D to Ixworth, villages between three and six miles from Bury St. Edmunds. It was a weird night march in pitch darkness, except for an occasional splash of light from the windows or open door of a wayside cottage where the folks, called by the noise of horses’ feet, stood outside to see the troops pass and vanish into the night.”

That was on 13 August so we can see that there was no delay in transporting the new brigade and their mounts closer to the potential front line, but what did they do when they got here?

Unfortunately Trooper X was sent to Great Barton but we can assume that the activity at all three local camps was similar. Being a part-time unit there was a need for both troops and horses to be brought up to standard for action; after all, these were men who had never even tasted Army rations before. Upon arrival they built saddle racks for their gear and the means to water the horses. They made maximum use of barns and outbuildings in which the troops could sleep on straw while wrapped in blankets, their haversacks used as pillows. Presumably The Beeches was selected for the extensive grounds behind the house. Having established what comforts they could in these rough camps they proceeded to training.

Both horses and men had to be familiarised with movement in formations and the tactics that would be used in the field. At first they simply exercised the horses then undertook military riding school to improve the riders’ technique. All were trained in general horse management. Then they moved on to the drills they would use as platoons, as squadrons and in regimental concentrations. Charging formations were practised, first at the walk and then with increasing speed. They rode out from their separate camps to meet for training and field days as well as a night march.

All this activity built towards a Brigadier’s inspection and a test of readiness. Having watched the men run through their drills the Brigadier addressed them and expressed his confidence in their ability, then, one evening after tea, the call of ‘Stand to Your Arms!’ went out. Horses were saddled, saddles packed and marching rations issued. After two hours the men were allowed to lie down in their kit and sleep. As they returned to their training regime they were never told if this was simply a test but armed guards were posted from then onwards and visits to Bury St Edmunds were time-limited. 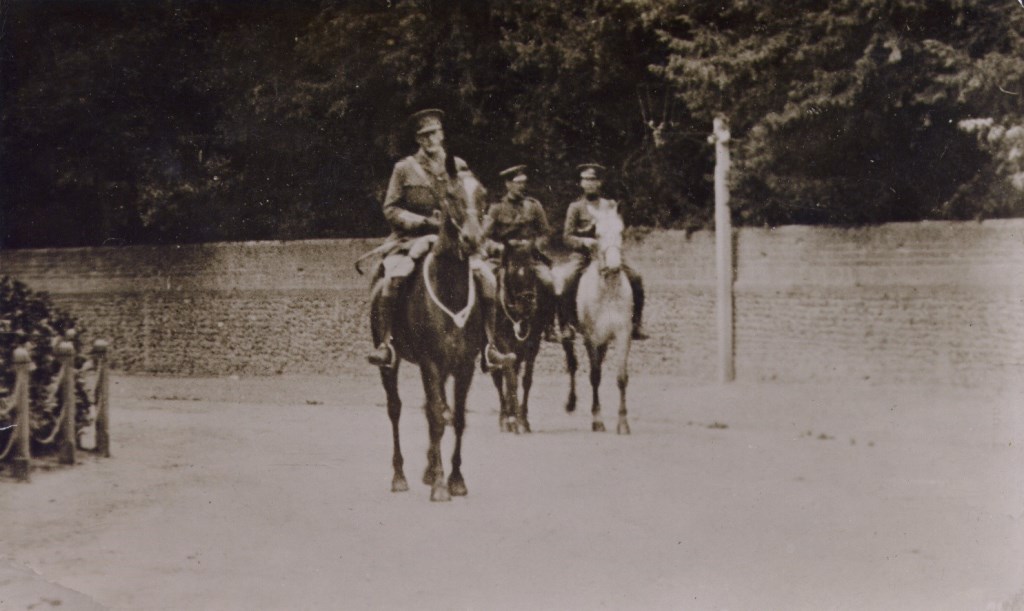 Captain (later Colonel) Charles Turner and two of his Men

The Ixworth Squadron was under the command of Major Yorke and he seems to have been keen on contact with the local population. His men put on a concert at the Pickerel in aid of the Prince of Wales’s Fund. Many of the ‘good old songs’ were performed by ‘The Tommies’; the daughters of local notables sang songs and played piano and Mr Harold Hooper’s songs and patter ‘brought roars of laughter’. Just over £13 was raised for the cause. Major Yorke also gave a speech ‘under the large tree’ in Ixworth High Street in support of a recruiting campaign for Kitchener’s Army. Twenty five recruits signed up.

The Gloucesters were camped here for fifteen days and conditions seem to have been benign, “mostly sunny summer days, starlight nights” according to Trooper X, but suddenly the War Office asked the Regiment to volunteer for service overseas. The threat of invasion had been discounted and men were needed abroad; being volunteers the Yeomanry could not be forced to comply. The War Office were thought to be putting on too much pressure by demanding an immediate reply although over 80 per cent of the men volunteered straight away and many more followed suit once their business and family responsibilities at home had been addressed.

On 28 August the Regiment left their camps, initially bound for Bungay although this was changed to Norwich while they were en-route. Troop trains took them from Norwich to Newbury Racecourse where they underwent a further re-organisation and, having completed their training, were shipped abroad. Despite the troops being here for only a fortnight there was time for a very enterprising Mr Lonnon, Ixworth’s High Street chemist, to produce the above postcard to sell to them.

Postscript. The Gloucesters were camped on Newbury Racecourse for six weeks while they underwent further cavalry training on Greenham Common. Overseas service was expected as they retired to winter quarters on 15 October with their arms and backs aching with inoculations. On 16 November they entrained again but found themselves in Cromer, on the North Norfolk coast, rather than at some south-coast port of embarkation. They performed coastal patrols along the cliffs between Overstrand and Sheringham until 15 December when they were marched to Hunstanton. Further coastal patrols were undertaken between Hunstanton and Heacham until April 1915; they were even the unintended target of a Zeppelin attack at Heacham on 19 January. Finally, a train took them to Avonmouth on 8 April and on 20 April they disembarked in Egypt.

They undertook garrison duties in the Alexandria area (training, escorting and guarding) for four months. On 20 August 1915 the Gloucester Hussars stepped ashore on the Gallipoli peninsula; after all that cavalry training they had been deployed without their horses into a purely infantry role. Within 24 hours they were fighting their way across an open salt-lake into the teeth of Turkish artillery. Most of the regiment was withdrawn at the end of October but their machine gun sections remained until December when the extreme winter weather filled their trenches to the brim with water and men suffered frostbite and were lost to hypothermia.

I would like to thank Larry Birkin, archivist of the Royal Gloucestershire Hussars Yeomanry Association, for access to the diary of Trooper X. A Troopers Diary, ISBN 978-0-9929-100-0-6, is available to buy from the Soldiers of Gloucestershire Museum at www.glosters.org.uk/shopHome/.