Those of you who may have taken time out to wander around our village Church of St Mary’s to have a look at the architecture, plaques and gravestones may well have noted the distinctive family name of Boldero which appears in a number of places; several male members went to Cambridge and went on to become members of the clergy.

The World Wide Web is indeed a very useful place to carry out research and often throws up some unexpected results. This was certainly the case when I was checking on the history of an Ixworth pub (that narrows it down a bit!), when quite unexpectedly I was directed to a recent edition of the ‘Lead Tokens Telegraph’ – not a publication, I have to readily admit, to which I had any intimate knowledge nor leaning previously! Certainly the pub was mentioned, but this was in the context of a former landlady in the 17th century – one Rebecca Boldero. Rebecca was baptised in 1634, married a John Bond and died in the year of 1674; she is buried in Ixworth Church.

So, what had the Lead Token Telegraph to do with all of this? Well, it turns out that Rebecca issued her own ‘coinage’ and the edition of the magazine contained photographs of one example pertinent to our village. You might be able to decipher the inscriptions: 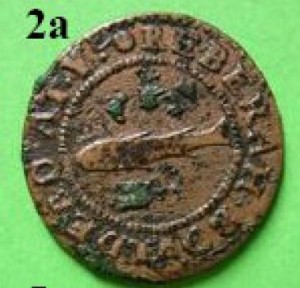 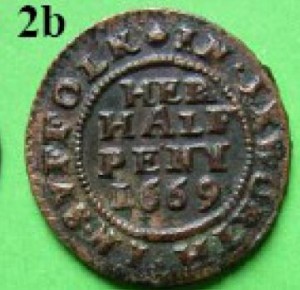 In case you can’t, the ‘head’ bears an image of a fish (probably a small pike), some ornamentation, and the words Rebekah Boldero and the ‘tail’, around the edge, the words Ixworth and Suffolk whilst in the centre, quite clearly, Her Half Peny 1669. The issue of this type of coinage or tokens was not uncommon during this period and they were probable given to clients in exchange for goods or services initially, and then used normally thereafter at the pub or, indeed, more widely in the village.

This first discovery prompted me to look further at the history of this family, as the name of Boldero pops up all over the place in Suffolk and beyond and that’s exactly why I first became interested – an interest which was heightened when it became apparent that there was a very definite connection with Ixworth. Not only that but the very name ‘Boldero’ itself, which I had always assumed to be of Latin origination, perhaps Spanish or Italian, or maybe a Norman corruption? Some light was shed when I discovered a singular and dedicated work in the Bury Records Office entitled ‘Boldero Family 1400 – 1986’ written by C & J Boldero who at the time of writing (1986) were living in Norfolk. In addition, I was able to have a look at various volumes of former Alumni of some of the Cambridge colleges. This former research suggested strongly that the name was of Danish (possibly German) derivation, probably from Balder / Baldur meaning ‘the Beautiful’ or from Old English Bealdric (Baldric) which means ‘the Bold’. So, the fictional Black Adder knew a thing or two after all and that ‘Cunning Plan’ of Baldric’s might have been more cunning that we had suspected! This all means that the name might have derived from the Saxon or Danish waves of immigration following the withdrawal of the Romans after 400 AD – quite a thought really and which completely knocked my supposition on the head.

The first reference of the family was from the Rougham / Hessett area in the late 1300s – early 1400s but it is certain that in 1449, one Johnannas Bolderyroo left a Will in Rougham. By 1485 a John Boldero was living in Fornham St Martin. Later, an Edmund Boldero, who died in 1523, married Elizabeth, daughter of Jankin Smythe of Bury who was a great and renowned benefactor of the time and who was instrumental in setting up the forerunner of the influential Guidhall Feoffment Charity. John purchased the Babwell Friary site (where the Priory Hotel now stands). Subsequent generations followed with some large families but with high mortality and there is a plaque in the aisle floor of St Mary’s in Bury: ‘Here lyeth buried George Boldero (d 1609), Gent, who lived in feare of God ……’ Another George (1598 – 1665) sold Babwell Priory to a Thomas Morphew and decided to come to live in Ixworth, but where, exactly, I have not yet found out!

This George was the founder of the Ixworth Branch of the Boldero family, an association which lasted some 250 years! George married Anne (who died in August 1672) and they had 7 children together of which one was the Rebecca of Pykerrel fame (buried in Ixworth Church) and son Simon (see below), but at least 4 of these offspring died in the year 1665, which seems to suggest, sadly, an outbreak of the Plague in Ixworth: after all the year 1665 was of great consequence in London as observed by Pepys in his diary. Whatever the actual situation, it must have proved devastating for the parents and family concerned.

There is a plaque to George and Anne in Ixworth Church (St Mary the Virgin), mostly in Latin, but which lapses into English thus: which two bodies here do stay, waiting for God’s Judgement Day’!! Simon, who was baptised in 1636, was described simply as ‘Gent’ although he also practiced as a Lawyer, had several sons by his wife Frances, but the ones of note from a purely historical standpoint, were probably Simon and John and George.

In similar vein, younger brother John who was born in our village in 1674, went up to Christ’s college in Cambridge at the age of 17, gaining a BA and MA, eventually becoming both a Fellow and Tutor; after that he was Vicar of Fen Drayton in 1707 and later Rector of Clipstone in Northants for an extended period up to his death in May 1751; there is a memorial to him as well in Ixworth Church.

Although George remained in Ixworth as a ‘Gent’, he married Ether Fiske which gave the next line to the Ixworth story, but perhaps here a whiff of scandal as the record states ‘… Had with other issue …..’! Notwithstanding, several children ensued, another George who died in 1761 and another Roger who passed on in 1794.

From this liaison sprang two further sons of Ixworth – yet another George and yet another John, pretty obviously favourite family first names, as well as Mary who was really the last of the Ixworth connection for the Bolderos actually living in the village.

This particular George was another high flyer gaining both a BA and MA from Caius College in Cambridge before becoming Perpetual Curate (and first Boldero in the role) of Ixworth and a JP for Suffolk. He died in Brussels in 1836. 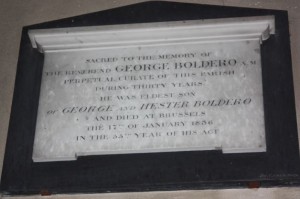 John became a Barrister but never ever married. Mary lived in the village all her life and was buried here in 1854 aged 64. 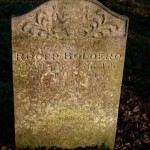 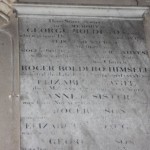 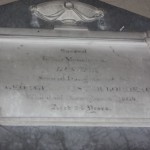 There were obviously a lot of other family members not mentioned here with various sons moving to other villages. An obvious example of this was ‘our’ John who became, as we have seen, Rector of Woolpit – one of his sons was yet another Simon, whose offspring were instrumental in the founding of the Bolderos of Rattlesden. There are even members of this extended living and well to this day in Australia!!

Next time you are around or in St Mary’s Church have a more detailed look at the plaques and floor plates and gravestones and you will be surprised indeed by the number of references to this long forgotten, yet very important, Ixworth family connection.

This combined article was published in the Magazine several years ago – you can download a copy by clicking here.

5 Responses to The Boldero family – The Ixworth connection