At the bottom of the High Street stands the rather imposing Cyder House with a lovely timber-framed shop frontage next to it and a run of low brick buildings along the Bury Road.  This was home to the Ixworth Cyder Factory (Cyder House was only given that name in 1958, before that it was Trayton House) but those buildings have long been associated with alcohol.

From at least 1821 John Goldsmith was a Wine & Spirit and Corn & Seed Merchant in the village; he owned these buildings and presumably needed all of them for his business.  John Booty was born at Wood Street Farm, he had taken over as Ixworth’s wine merchant by the time of the 1844 White’s directory and he continued in that trade until his death in September 1884.

On the 1847 tithe map John Goldsmith is still the owner of the site, with John Booty as tenant, but Booty bought the old place in due course. 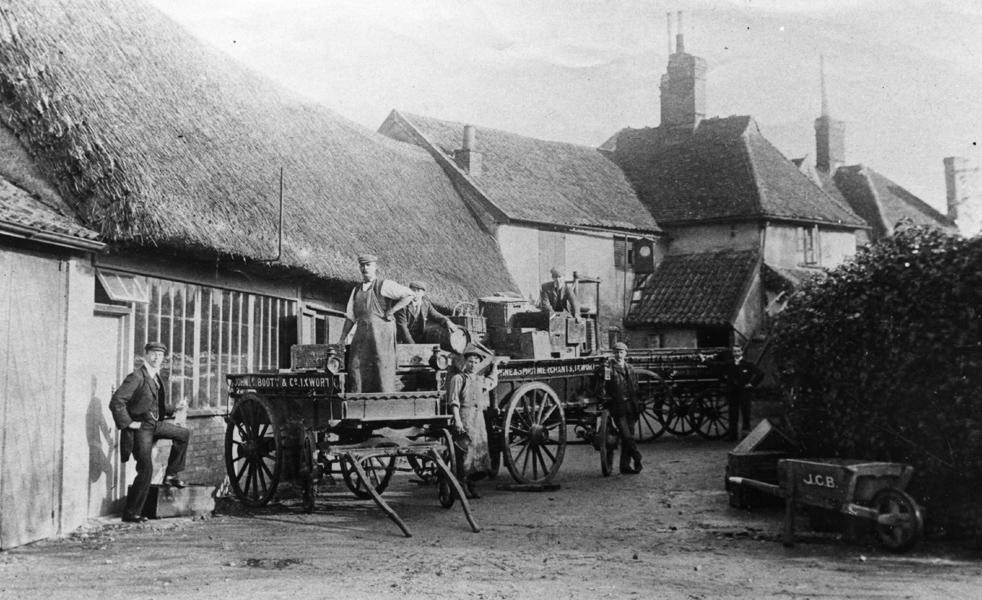 The rear of John C Booty’s premises circa 1900

John Booty’s son was christened Samuel John Clarke Booty but he traded as John C Booty.  In 1871 he was a Traveller in the Wine Trade and living in Stanton; he had previously lived in Kensington where he had married and had a child.  By 1880 he was living in Ixworth and managing his father’s business.  His wife died in 1884, only 18 days after his father.

John C Booty & Co now traded from his father’s old premises and was listed as a Wine & Spirit Merchant, Mineral Water Merchant, Cigar Importer, Agent for Morgan’s Ales & Insurance Agent.  He re-married in June 1887 to a lady from Great Yarmouth.  Unfortunately his second wife died in January 1904 and John C Booty committed suicide that October in the river near Hempyard Bridge.  The location is still known as Booty’s Hole to Ixworth anglers.  The inquest mentions the loss of his wife and the poor state of the business as contributing to his state of mind.

Within two months John C’s nephew, Conrad Wohlgemuth, had bought the business which he continued to run in the name of John C Booty & Co.  Intriguingly, in his first newspaper ad, he claims the business to have been ‘Established 1770’.  In October 1906 the Bury & Norwich Post tells us that all of Conrad’s furniture is up for sale because he is relinquishing housekeeping but on Christmas Day that year we are told he is subject to a receiving order.  Bankruptcy proceedings were taken against him at the High Court but repeatedly adjourned due to his ill-health.  In February 1908 Conrad died, at his parents’ home in Greenhithe, and the case was closed.  There was a further legal case in 1909 as to whether or not the business had been sold to Conrad with due diligence from John C’s executors. 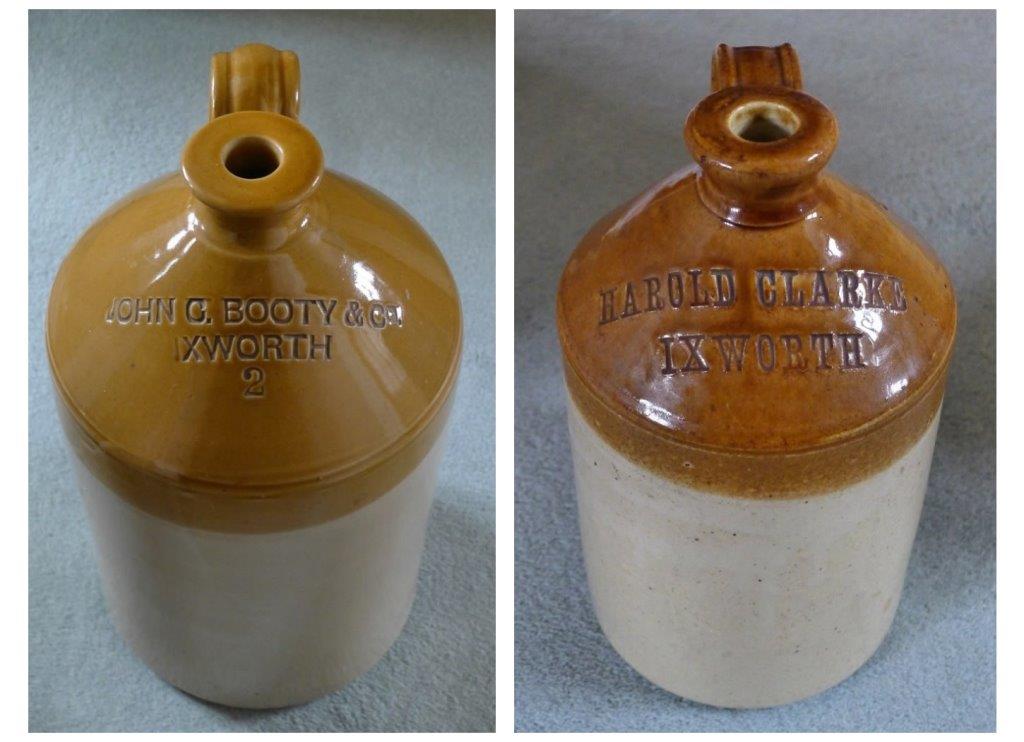 In 1901 Harold was lodging in Sudbury and working as a Maltster’s Clerk; his future wife, Alice, was living with her Aunt in Long Melford.  They married in 1907.  Presumably Harold was an ambitious young man looking for an opportunity and his uncle was aware of a troubled business in Ixworth.
In 1908 Harold Clarke is listed as a Wine & Spirit Merchant, Mineral Water Merchant, Cigar Importer, Ale, Porter, Malt & Hop Merchant working from Booty’s old premises.  The 1911 census has him as a Mineral Water Manufacturer too.

Shortly after the First World War Harold bought the Coal & Corn Merchant’s business at Thurston Station, which he ran in parallel with the wine business, but by 1925 he had sold the Ixworth premises and moved to Thurston.  And so the stage was set for Ixworth Cyder. 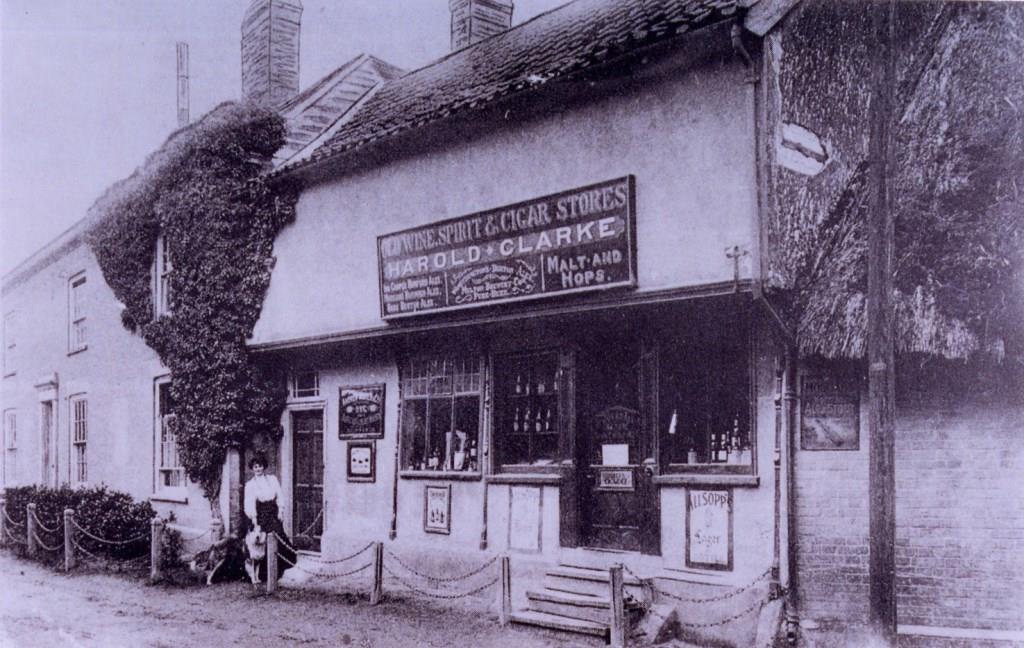 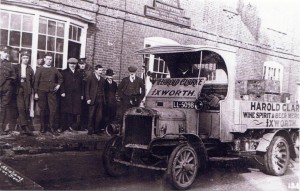 A Harold Clarke delivery to the Scole Inn

The name of Clarke still lives on in the memories of Ixworth residents.  Confusingly Robert Clarke opening a garage (and later a shop) in the High Street at the same time as Harold moved out of Trayton House.  However, I am not aware of any family connection between Harold and Robert.

You can download the original article by clicking here.

The image of John C Booty’s business is reproduced by kind permission of the Bury Record Office.

One Response to Boozy Ixworth – The influence of alcohol on Ixworth