Many of you in the village will be very familiar with our local Anglican church – St Mary the Virgin Church, but I wonder whether you often lift your eyes above shoulder height to really take in the magnificent west tower? 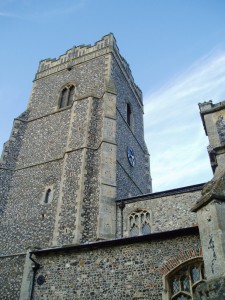 The tower (started about 1471) is very impressive with walls at least 6 feet thick at the base and foundations measuring nearly 7 feet.

The patterned flush work on the exterior of the tower is wonderfully executed and the designs on the limestone buttresses (see left), as well as round the base of the tower, are highly unusual for a parish church.

The conclusion must be the church’s proximity to the Augustinian Priory; there was obviously money to be spent. Those designs carried a message to medieval man which is somewhat lost on the modern version!

It’s a great pity that many of the original embedded flints are no longer on display. Furthermore, the castellated top of the tower would have accommodated a number of statues of saints rendering a really spectacular skyline effect especially against the setting sun. 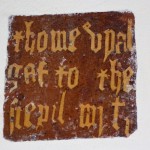 The lozenge motif, which reappears on the tower, is from the shield of Gilbert le Blund and points to the Priory as a major benefactor. The tower finally received its leaded roof in 1484 from which one may infer it was elevated in the remarkably short time span of 14 years.

First an easy one:

Thomas Vyal a local carpenter who died in 1472. His generosity is remembered by this tile in the wall over the west door, inscribed, as you can see, ‘Thome Vyal gaf to the stepil iiij li’ (that is iiij = 4, li = librium, so £4). Carpenters were integral to the work of the stone masons and equally important craftsmen in medieval England. 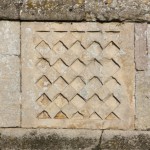 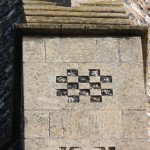 Above are two views of the lozenge or chessboard motif, as already mentioned and from the coat of arms of Gilbert le Blund (our very own Norman baron) who re-founded the Priory on its present site. Former French ancestors of the le Blund’s may have been the leblond’s who had the same design on their shield. 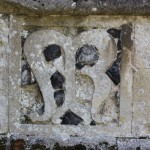 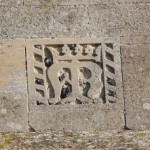 Here we have the distinctive letter M (with a crown above on the right) and sometimes intertwined with the letter R; this always denotes Mary and combined with the R (Regina) or the crown itself sends us the message – ‘Mary, Queen of Heaven). 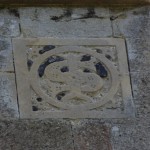 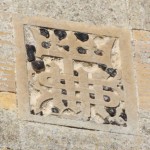 Above are probably two versions of a similar message: on the left a crown surmounting some intertwined letters – IHS and on the right the letters IS within a circle (which always refers to eternal life). The Ihs monogram is a very old symbol, dating back to the first century. Ihs is the abbreviation of the Greek name Jesus (Iasous) pronounced ‘hasous. In addition, the Latin phrase Iesus Hominum Salvator (Jesus, Savior of Men) can be abbreviated as IHS. So the message can be condensed as Jesus, eternal King of Heaven and saviour of men. 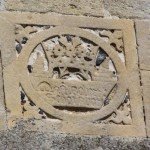 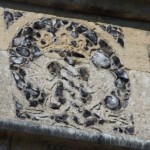 Perhaps just a couple more to conclude but I have to say there is still more research to be done; on the left you will see the circle, a crown containing crossed arrows and Viking ship. This undoubtedly alludes to the the martyrdom of our own Anglo Saxon king Edmund at the hands of the Danish invaders, later to become St Edmund, Patron Saint of England, and to whom the massive Benedictine Abbey in Bury St Edmunds was dedicated. The design on the right is a bit more difficult to interpret; I’ve cheated a bit as it’s not on the actual tower, but it does have meaning as it depicts two Wyverns (a mythical dragon like creature) with inter-coiled tales surmounted by a crown. The Wyvern is always a symbol for Satan, so the simple message here is God rules above the devil!

Very lastly, when you next pass the tower see if you can find the following; I have to admit I have no idea why they are there. Maybe you do? 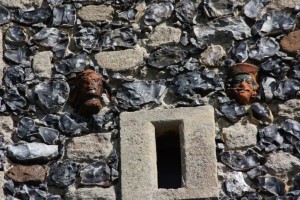