During the late 19th century Ixworth could lay claim to fame, in fact a genuine World First, although the roots of this were not particularly glamorous.

The items in question appear on the 1905 Ordinance Survey map, but not on the 1886 edition, which means they must have been constructed between these dates. In fact they were constructed alongside Stow Road for habitation in 1894 and they were the very first rural, Local Authority housing ever! The history of these buildings had their roots in the dreadful housing conditions of many agricultural workers during the 19th century, which prompted several national reports and eventually lead to the ‘Housing of the Working Classes Act of 1890’, which gave powers to the Local Sanitary Authority to demolish or improve inadequate accommodation or, more importantly in this case, to provide Lodging Houses for the working classes. They also brought into public view quite open, hostile, even vitriolic conflict between the then Lord of the Manor, Richard Cartwright and the Incumbent of Ixworth, the Rev Frank Perrott.

As early as February 1891 the Ixworth Labourers Association had petitioned the Sanitary Authority about the condition of some of their members’ housing; by May a formal application had been made to this equivalent of West Suffolk County Council. The accommodation under consideration was in Commister Lane (No 5) and Stow Lane (Nos 1 – 3) and a public meeting was held in the Parish Room where the Medical Officer of Health, a Dr Kilner, stated that the four dwellings were unfit for human habitation.

Nonetheless, the Council dragged its heels, which elicited a scathing attack from Perrott in a personally published pamphlet, reported in detail in the Bury and Norwich Post on 23rd June. A second public meeting was held at the end of September, interestingly at 3pm to avoid a large crowd, where analysis of deaths over the previous 10 years was presented. Another fiercely direct attack on Cartwright was penned by Perrott, this time to the East Anglian daily Times on 6th October as the tide began to turn. 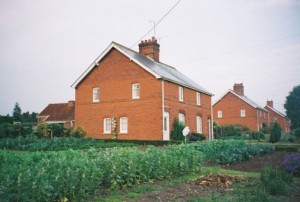 By May 1892 the Vicar was on the Board of the Sanitary Authority and soon a Notice to Quit was served on the landlord, with new housing planned for the dispossessed as 2 blocks of 4; in fact, as we see today, 4 pairs of buildings were erected during 1893 for habitation in the following year.

Sadly, Frank Perrott did not survive the confrontation with his benefactor as, after becoming Chairman of the Sanitary Authority for just one meeting to get the motion passed, he resigned that position and was relieved of his incumbency by, one imagines, a vengeful Lord of the Manor. He left Ixworth and never ever returned. However, this global landmark for our community is a continuing tribute to his just tenacity on behalf of the less well off of his
parishioners.