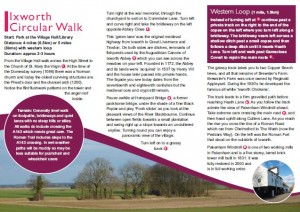 From the Village Hall walk across the High Street to the Church of St. Mary the Virgin . At the time of the Domesday survey (1086) there was a Norman church and today the oldest surviving structures are the Priest’s door and the chancel arch (1200). Notice the flint flushwork patterns on the tower and the angel roof inside.

Turn right at the war memorial, through the churchyard to exit on to Commister Lane. Turn left and curve right and take the bridleway on the left opposite Abbey Close . This ‘green lane’ was the original medieval highway from Ixworth to Great Livermere and Troston. On both sides are ditches, remnants of fishponds used by the Augustinian Canons of Ixworth Abbey which you can see across the meadow on your left.

Founded in 1172, the Abbey and its lands were ‘acquired’ in 1537 by Henry VIII and the house later passed into private hands. The façade you see today dates from the seventeenth and eighteenth centuries but the medieval core and crypt still remain. Pause awhile at Hempyard Bridge , a former packhorse bridge, under the shade of a fine Black Poplar and play ‘Pooh sticks’ as you look at the pleasant views of the River Blackbourne. Continue between open fields towards a small plantation and swing right up a slope towards an uncluttered skyline. Turning round you can enjoy a panoramic view of the village.

Turn left on to a grassy track. The grassy track takes you to two Copper Beech trees, and all that remains of Brewster’s Farm. Brewster’s Farm was once owned by Reginald Appleyard. During the 1930’s he developed the famous all white ‘Ixworth Chickens’.

The track leads to a firm gravelled path before reaching Heath Lane . As you follow the track admire the view of Pakenham Windmill ahead. Take extreme care crossing the main road, and then head uphill along Cutters Lane. As you reach the rise you cross the line of a Roman Road which ran from Chelmsford to The Wash (now the Peddars Way). On the left was the Roman Fort that stood on the outskirts of Ixworth.

Pakenham Windmill is one of two working mills in Pakenham and is a five storey, tarred brick tower mill built in 1831. It was fully restored in 2000 and is in full working order.

Instead of turning left at continue past a private track on the right to the end of the copse on the left where you turn left along a bridleway. The bridleway veers left across a shallow ditch past a small copse and then follows a deep ditch until it meets Heath Lane. Turn left and walk past Gameclose Covert to rejoin the main route.

Carry on down Thieves Lane and over Fulmer Bridge to the junction with Fen Road. Turn left and continue to another T-junction where you turn left onto Mill Road . In a short distance you will reach Pakenham Watermill. Pakenham  Watermill dates from the 18th century and is the last working watermill in Suffolk. For over 1000 years millers have been using waterpower to produce stone ground wholemeal flour from locally grown wheat. Today, the mill is maintained and operated by a team of dedicated volunteers who continue this tradition. It is open to visitors and has a tearoom and a programme of events throughout the year (contact 01379 783 554, pakenhamwatermill.org.uk)

Past the watermill enjoy beautiful views over the 17 hectares of the Mickle Mere , a low lying seasonal wetland owned by the Suffolk Wildlife Trust. On your right is the entrance to a bird hide, full of fascinating information including the  Suffolk Barn Owl project. Do read the wildlife records book. The mere dries out during the summer but at other times regularly floods providing excellent opportunities to see many species of migrating waterfowl. The mere is also home to a variety of mammals including otters and water voles.

Returning to Mill Road, continue to the A143 and take great care crossing the road. Walk to the left and then right to enter the southern end of High Street. Many of the houses along High Street date from 14th-16th century. Notice Tollgate
Cottage on your right and the half timbered Bridge Farm just before you cross the River Blackbourne.

TO DOWNLOAD THE FULL BROCHURE PRODUCED BY SUFFOLK COUNTY COUNCIL ON THE CIRCULAR WALKS AROUND IXWORTH PLEASE CLICK HERE.