On the evening of 14th May 1940 Anthony Eden, the Secretary of State for War, made a broadcast to the nation calling on able-bodied men between the ages of 17 and 65 to go to their local Police Station and enrol in the Local Defence Volunteers (LDV). The war in Europe was not going well; Holland had surrendered earlier that day and the invasion of Britain was thought to be imminent.

The immediate threat was considered to be sabotage by enemy agents who would either arrive by parachute or be ‘fifth columnists’ already living here. The LDV would be in place across the country to thwart them. The volunteers were organised on a county basis and our local company was to cover the Blackbourn Police District under the command of Captain Gilbert Kilner.

The Blackbourn Police District was the same as the Blackbourn Hundred and covered 34 parishes, south of the Little Ouse, as far west as West Stow, east to Rickinghall and south to Elmswell. Captain Kilner was formerly of the Suffolk Regiment and had served with distinction as a Machine Gun Section Commander in Gallipoli and Palestine, being awarded the Military Cross and Mentioned in Despatches. He was the manager of the Ixworth Cyder Factory and lived in Trayton House, now called the Cyder House. His military experience was a boon to the LDV; the fact that he was a keen historian who kept extensive records is a boon to us. Several local people remember him as ‘Giggy’.

The LDV was renamed the Home Guard in June 1940 at Winston Churchill’s suggestion, and, in August 1940, it was restructured and linked to the County Regiment system of the Regular Army. It was soon realised that the Blackbourn area was too large for ease of administration and so it was divided into three companies. What was now ‘C’ Company, 2nd Battalion Suffolk Home Guard covered the parishes of: Ixworth, Ixworth Thorpe, Bardwell, Stanton, Walsham le Willows, Badwell Ash, Great Ashfield, Langham, Hunston, Stowlangtoft, Norton and Pakenham. Gilbert Kilner was soon promoted to Major and ran the Company from its HQ in Ixworth.

As the LDV, the Company had established nine observation posts to watch for paratroops and had manned roadblocks and checkpoints on the main roads. Once the initial ‘panic’ was over a more formal system of anti-invasion defence was established. This was designed to slow the progress of an invading army by defending a series of ‘stop lines’ across country. Our stop line ran from the mouth of the River Orwell, along the Gipping to Haughley, then to Elmswell and Norton, along the Black Bourn to Euston and along the Little Ouse to the Great Ouse. The rivers were natural tank obstacles and there are still many pillboxes to be seen along that line to re-enforce them. Ixworth itself was designated as a ‘nodal point’ because it was a major highway junction; roadblocks and heavy weapons were needed here to halt enemy amour.

By 1942 Eastern Command had redefined Ixworth as a ‘defended place’. Under this new system the village would be fortified and would contain a garrison of Home Guard troops. The aim was still to deny the enemy access to the highways and to slow their advance. In so doing the Home Guard were committed to fight to the last man and the last bullet and, as the battle progressed, to fall back to a final defended location or ‘Keep’ from which counter attacks could be mounted. Ixworth’s Keep was the Cyder House, Major Kilner’s own home. 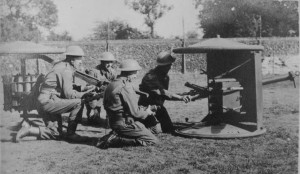 Gilbert Kilner has left us the Royal Engineers’ map of the planned defences for Ixworth and they consisted of miles of barbed wire fencing around the perimeter of the village with machine gun positions and weapon pits to cover it. The roads were blocked in several locations (including the car park of the Greyhound) by concrete cylinders and the roads around the Cyder House were blocked by ‘hairpins’ which consisted of bent sections of railway line set into the road like dragon’s teeth. There were already three pillboxes in the village: by the river at Bridge Farm, at the Stow Road junction and in the High Street near the Thetford Road junction. Several areas within the village were designated as minefields to plug gaps between buildings, including what is now a walled garden next to the entrance to the Church.

If the Company were to tackle an armoured advance they would require more than just rifles. The heavier weapons available to them were Browning Machine Guns, Northover Projectors, Smith Guns, Flamethrowers and the Blacker Bombard or Spigot Mortar. The Northover Projector was basically a drainpipe on legs which could propel a 24-ounce glass bottle, filled with self-igniting phosphorus and liquid rubber, over a range of 200 yards. The Smith Gun was pulled along on its large disc wheels; once in position, it was tipped on its side and one of the wheels became its firing base. It could fire mortars or anti-tank shells.

The Spigot Mortar arrived later and could propel a 20lb bomb up to 450 yards although its reliability and accuracy were often questioned. It could be deployed in the field by being fixed to a large ‘crucifix’ of metal arms on the ground but its lasting legacy is the Spigot Mortar Emplacement. 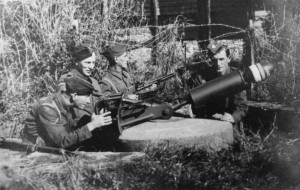 A Spigot Mortar on a concrete emplacement in Ixworth, probably at the Abbey

There were planned to be twelve such emplacements in the village. It seems certain that not all of these were built in practice and we have only found physical evidence of five being built so far. The emplacement consisted of a concrete ‘thimble’ which was roughly cylindrical, three feet in diameter and three feet high, with a stainless steel stud fixed in the top. The thimble was set in a circular trench so that the stud was level with the ground; the operator would stand in the trench and the mortar was fitted on the stud at about his chest height. The weapon was used to ambush the enemy; because it was slow to reload it had to be hidden from view while this activity went on. The most extraordinary example in Ixworth is in the garden of Dover House. Here the thimble is close to a flint wall which has a panel in it resembling a very low, blocked-up doorway. At ground level there is a pipe through the wall which allows the mortar team to watch for tanks coming down the High Street. If the enemy approached they would smash the wall panel out and fire the mortar through the resulting gap.

It is no surprise that such an elaborate position should be established next to the Major’s Keep. Further evidence of the importance of this location is the pair of loopholes (now blocked up) which were cut in the garden wall between the Cyder House and Dover House allowing defenders to fire out with rifles. There was also a plan for a minefield here running from Dover House all  the way back to the river.

As the possibility of a full-scale invasion became remote the Company was re-organised into eight fighting platoons based in Ixworth and the surrounding villages with a further, specialist, machine gun platoon drawn from personnel across the Company. Communication between the village platoons was by public phone and either despatch rider or pedal cyclist. In addition, the Company HQ could communicate with the Battalion HQ in Bury by carrier pigeon. The pigeon loft was at Bury. 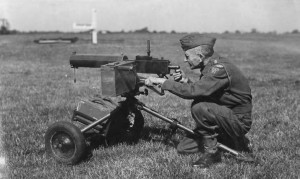 Major Kilner demonstrates a machine gun mounting of his own design

Major Kilner’s background as a machine gun man is clear to see; he built a mounting in his own garden which allowed the Browning to be used as an anti-aircraft weapon and he also designed a mobile mounting for the gun. This mounting had wheels and could be towed behind a staff car or even dragged across country by a single soldier; the gun could be fired while attached to the mounting with good results. Major Kilner’s superiors encouraged him to send the design ‘up the chain’ to be put into production for the whole of the Army but,  unfortunately, there was no capacity at the weapons factories for work to proceed. We also have a photograph of the Major standing proudly beside the platoon members who represented the Battalion in a machine gun competition and came first.

The Company enjoyed a good reputation for training its personnel as signallers, intelligence officers and stretcher bearers. Around the time of D-Day the Company manned nine Air Observation Posts and Major Kilner was pleased to note that these positions coincided with the ones he had chosen back in the LDV days. They also supplied a detachment to support the coastal defences at Orford.

Some idea of the spirit of Major Kilner can be gained with a quotation from his papers:

“A particularly interesting ceremony marked the third anniversary of the formation of the Home Guard. The Company, together with ‘D’ Company, held a parade in Ixworth and were inspected by a US Army Colonel who afterwards took the salute when the companies marched past headed by the Drum & Fife Band of the Welsh Guards. This was followed by a spectacular demonstration of the heavy weapons; smoke from the flame throwers effectively terminating the proceedings”.

The Home Guard was stood down in December 1944. The strength of ‘C’ Company at this time was 24 Officers and 486 Other Ranks. Included in the ‘other ranks’ were three women auxiliaries, one of whom was Mrs Kilner. Major Kilner’s papers list the names of 73 men in the Ixworth Platoon alone. Perhaps the final action of the Home Guard came on 15 August 1945 when Major Kilner agreed to hand over their remaining supply of cocoa to be used at the village’s Victory Tea. 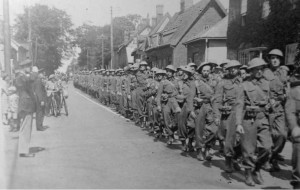 It is not widely known that the Home Guard was reactivated from 1952 to 1956 in response to another ‘panic.’ This time it was the Korean War. Many thought that the Korean War would be the trigger for World War Three; parachuting saboteurs were expected again, but this time from the Soviet Union. With so many regular troops away fighting there was a renewed need for local defence. Remarkably, on 27th May 1952, at the age of 64, Gilbert Kilner was commissioned for a second time, this time by his Queen and as a Second Lieutenant in the Home Guard. He resumed the rank of Major and commanded the Ixworth Home Guard until 1956.

In 1958 Gilbert Kilner retired from the Cyder Factory when it ceased production. He moved to Bury St Edmunds and occupied himself with his interests as an antiquarian and amateur archaeologist. He died in the West Suffolk Hospital, where his grandfather had been a pioneering surgeon, in 1960.

The History Group would like to thank the Suffolk Record Office for access to Major Kilner’s papers and the Suffolk Regiment Collection for agreeing to publication. His Home Guard scrapbook is held at the Bury RO (ref GB554/Y/1/636(f)). Email bury.ro@suffolk.gov.uk for queries. We would also like to thank David Reeve for his guided tour of Ixworth defences.

6 Responses to The Home Guard in Ixworth