The Gravestone in Ixworth Graveyard

Should you find yourself with a spare moment one day when you are in the vicinity of St Mary’s Church, then an assiduous search of the old Churchyard will finally reward your tenacity, as you will discover the gravestone of one Joseph Warren, another long forgotten, yet important, person from our village’s long history.

Not that he was actually a native, but I suppose, even in his day, living for nearly 60 years in a non native community really counts as being a native anyway? Whatever, Joseph was actually born in Attleborough in Norfolk in the year of 1792 and passed away, at the elevated age of 84, in 1876.

By his own admission, he came to Ixworth in 1818, so a very simple calculation yields that he was 26 years of age when he upped sticks and arrived in the village. Why he eventually ended up here is still a bit of a mystery, but by the way he quickly established himself in business, one might deduce that he had family connections or had come into an inheritance locally. He became an avid collector of antiquities, and quickly established himself as Postmaster, clock and watchmaker; he is noted as such in White’s Suffolk Directory of 1844, but only as ‘Dealer in Antiques’ in the 1874 edition, by which time Nathaniel Randell had taken the other business.

Indeed, as early as 1828 he had become very interested in archaeological objects, driven mainly by the desire to save rare coins from being melted down following a deceit played on him by a ‘reputable’ collector. In 1834 he identified a Roman building (probably a bath-house) on lands associated with Dover Farm. As an aside, I believe there are at least one (maybe two) of Warren’s large clocks still in the village

Most of his early finds were of the Roman period or even earlier. So, Joseph Warren became clock and watchmaker and postal officer from Ixworth and spent many years acquiring objects, especially in the immediate area of his home. 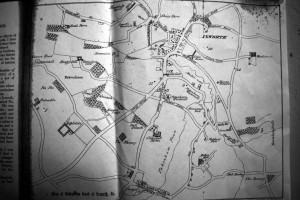 Map of Ixworth by Joseph Warren 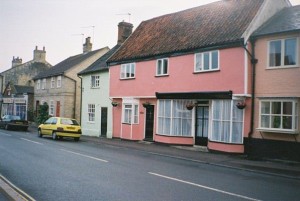 He kept the best objects for himself and sold the rest. Such was his growing reputation in this arena that he was a founder member, in 1848, of the Bury and West Suffolk Archaeological Institute, later dropping the Bury and West from the title. The very next year, to be precise, on the 14th June 1849, he read his Paper entitled ‘Antiquities found at Ixworth’ to a full meeting of the Institute, a Paper that contains text on his finds to date, drawings, and a very helpful, numerated, map (see copy above) of where everything was discovered. Ixworth looks pretty small compared to today!

His reading accompanied a physical visit from members to his home village, as his opening paragraph quite clearly demonstrates (my underlining):

“Wishing to do all in my power to promote the objects of the Society on the occasion of their visit to Ixworth, I have drawn up a short account of the antiquities which have been found in this
parish and its immediate neighbourhood”.

His full text can be found in Volume 1 of the Proceedings of the Institute dated 1853, available for view in the Bury Records Office.

If you do manage to read his account, it is very instructive. In it, for instance, he makes allusion to a pot full of Roman coins discovered in 1764 towards Stowlangtoft, near the bridge by the Hall, obviously a little before his time, as well as a tessellated pavement found near Redcastle Farm (No 1 on the map). He actually interviewed an old gent who was a boy when it was discovered (some 80 years previously) who confirmed that it ‘was thought very handsome and gentlemen came many miles to see it; that it was in a pasture near the farm-house and that a fence was put up to protect it from the cows’. Sadly, the cows broke through one night and the pavement was completely destroyed. Warren actually went back to the spot where he saw the still visible Roman road nearby ‘where I find it very conspicuous across the three fields at the back of the cottages at Puttock’s Hill’. This is the probable road from Icklingham to Ixworth – I’ve had a look recently but nothing seems to remain today. As another of his many examples, he cites ‘No 4, a small British silver coin of Cunobelinus, very rare, having on the obverse CUNO in a wreath, and on the reverse, Pegasus with CAMU (Colchester) below. It was found in 1826 by a man putting down a tree near the chalk pit on the right hand side of the road to Walsham, and is now in the British Museum’.

A large part of his account refers to his excavation, in 1835, of the Roman building discovered during ploughing the year before and situated ‘about half a mile to the south of Ixworth on the road to Stowlangtoft’. There were many associated finds and investigation revealed a Roman bath house with under floor heating which he surmised as belonging to a ‘Roman villa of magnitude or to the public baths of a municipium or station’.

Later, many objects came into his possession from a later era. Arguably, the two most famous are the Anglo-Saxon Ixworth Cross and the Tostock buckle, the remainder from other parts of East Anglia. 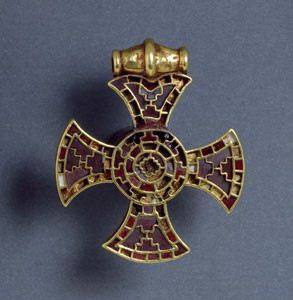 The Cross is really quite special, being a jewelled pendant made of gold which was originally entirely covered by garnets backed with hatched foils. It resides today in the Ashmolean museum (Oxford) and they describe it thus:

The precise execution and symmetry of the compartments of the cloisonné work is highly sophisticated. That the design has been thought through quite carefully is also apparent from the change of colour tone of the garnets, which tend to be darker towards the centre. The small size of the cells may indicate reuse of old garnets, an established seventh-century practice in Anglo-Saxon jewellery.

The pendant was found at Ixworth, Suffolk in 1856. It was acquired by Joseph Warren and then in 1866, by Sir John Evans. It was presented to the by Sir Arthur Evans in 1909. The buckle dates to the seventh century and was
found c. 1840 at Tostock, It was then purchased in 1851 by Warren and eventually acquired by Sir John Evans. It, too was presented to the Ashmolean by Sir Arthur at the same time

A few Easter holidays ago, we were staying near Oxford and took the opportunity to visit the Ashmolean; it was astounding just how many treasures of Warren’s from Ixworth and surrounds are on display but sadly, on our visit, the Ixworth Cross was not one of them. Joseph Warren carried out a long correspondence with a number of collectors and that included the famous Evans himself (for some 20 years), which demonstrates his standing as a collector at that time. Some examples are shown which are either to him or give him mention:

A selection of Joseph Warren Letters

In the letter on the left Joseph tells Evans ‘I have met little in the way of antiquities since I last wrote to you till a fortnight ago when a small gold coin, 19 grams, one of the Merovingian ones I think, found near Wells on the Norfolk coast, came my way’. Warren then goes on to thank Evans for his suggestion to make the casts in ‘gutta percha’ instead of sealing wax, as it was better for posting!

In the centre is a note from Ackermann (a cataloguer) with an image of the buckle stuck onto the page. The right page is the entry from Joseph Warren’s handwritten catalogue for the Tostock buckle.

Finally, on the right is a letter of 5 December 1893 (written after Warren’s death) from W.H. Tuck of Tostock House and reads

‘Dear Sir, on reading your interesting article in Longman’s I am reminded that I was told by Mr. G. Franks that he believed you possessed an interesting Anglo-Saxon buckle from the Warren collection, found in 1843 on ‘the Leys’ here, just astride my gate and figured in Ackerman. Have you still this by you? And, if in London, may I be allowed some day to see it? I presumed that this must be quite genuine! Believe me, yours very truly W.H. Tuck’

A selection from Joseph Warren’s collection

After his retirement in 1860, at the age of 68, Warren was presented with a purse of sovereigns ‘as a testimonial of their respect from his neighbours and friends’. He didn’t actually retire completely as he continued to travel around the local villages as far as Icklingham until well in to his seventies, with his ambition of finding even more antiquities. In 1866 Sir John Evans obtained, by purchase, his large collection and Warren supplied him with supporting text, his carefully constructed ‘Journal’, as to where everything had been found which he had compiled from his field notes.

Both this journal and the collection were presented to the Ashmolean Museum, as already explained by Sir John’s son, Sir Arthur, famous himself for his excavation of the Minoan palace at Knossos.

Written by Mike Dean, member of The History Group of Ixworth