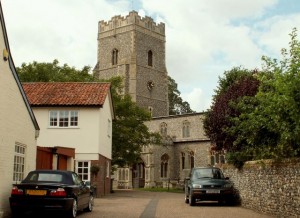 One road that runs through Ixworth connects Colchester and Brancaster. The Romans erected a fort across the road, protecting one of the village’s main points of entry. Once they had left England, the Saxons began to settle in the area and Ixworth continued to grow in the same place.

Ixworth has always had strong farming connections from Saxon times all the way to the well-known farms that surround the village today. The village is even suspected to have gotten its name from“Gisca’s werth”, the farm of Gisca. Gisca is believed to have been a nickname meaning ‘the man with the hiccups’.

When William the Conqueror’s Domesday Survey was conducted, this prosperous farming community consisted of a mill, vineyards, parkland and enough meadow to support a sheep herd, three plough teams and even hops. One of those plough teams, 5 acres of meadowland and 80 acres of arable land provided income to the Parish Church. In the Domesday Survey, this was valued at 5/-.

During the Norman era, the first Lord of the Manor was Robert Blount. A century after the Blount family took up residence; they built the Priory of Austin Canons in Ixworth, the remnants of which are now known as ‘the abbey’.