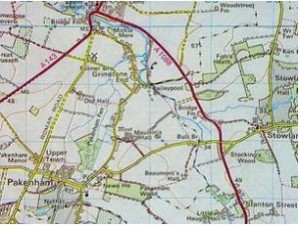 The article below is taken from the Domesday Reloaded. In 1986 the BBC launched an ambitious project to record a snapshot of everyday life across the UK for future generations.

When the new Ixworth Bypass was planned the route went over a known Roman site. The builders allowed local archaeologists some months in which to excavate the part of the site which would be destroyed by the road.Jane wrote the following after our visit:

On Thursday we went to the Ixworth Dig.The Lady showed us an aerial picture of the Roman village and it had three lines in it.The lines were the Roman Roads that went round the village.The Lady showed us the dark circles which was all that was left of the houses.They had also found a ditch which was part of the fort.A Roman kiln had been found.We were allowed to search the soil tips.We found many animal bones and oyster shells. We also found several bits of pottery.Ross found a piece that was too good to keep.The lady kept it.