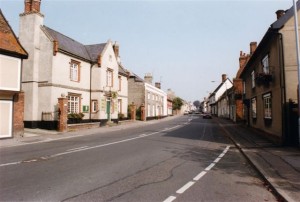 Ixworth is a village and civil parish in the Borough of St Edmundsbury in Suffolk, United Kingdom. It is situated some 6 miles (9.7 km) north-east of Bury St Edmunds, on the A143 road to Diss, and has a population of 2,177.

At Ixworth three ditches outline the east and south sides and rounded south-east angle of an enclosure, which is the remnants of a Roman fort. The visible portion of the east side is about 500 feet (152 m) long, of the south side about 450 feet (137 m), while there are faint indications that the full length of that side may have been as much as 625 feet (191 m). An east gate is visible some 250 feet (76 m) north of the angle, and there used to be a south gate. A road system is related to these gates, but it is not clear from photographs whether all the system is original or whether in part it represents the former course of lanes which cross the site. Ixworth became an important junction in the Roman road system of East Anglia.

It was an important Roman settlement and also had an Augustinian priory (founded 1170, dissolved 1537). Remains of the priory can be found incorporated into a house confusingly known as Ixworth Abbey.

In the 1871 census brewer, Edward Greene (also MP and then aged 55y) is listed living at The Abbey. The High Street still has some fine timber framed houses.
An early pagan cemetery with Anglo-Saxon burial urns was discovered south-west of the church some time before 1949. In 1868, Anglo-Saxon burials were found in Cross House Meadow. The Peddar’s Way was a Roman road which ran 48 miles from Ixworth to Holme next the Sea.

The south end of the High St and town may also be historically listed as Ixworth St Mary. The settlement was recorded in Domesday as “Icsewrda” or “Giswortha”.
A Q Type bombing decoy was operated in the north-east of the parish (at TL 948 714) to deflect enemy bombing from RAF Honington.

Closed pubs include the Angel, Crown (74 High St), Woolpack and White Horse – while the Greyhound and Pykerel pub remain active.